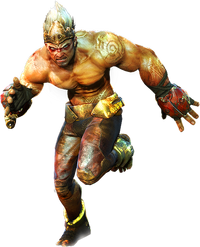 Monkey is best known for being a loner. He is difficult to approach and is someone whom you wouldn't want to engage in combat. Monkey has milky white spiky hair and white scars on his body as a result on his past battles with the mechs. The majority of his life has been spent in the wilderness, surviving by using the resources available to him. Generally, he attempts to avoid people and confrontation, however, when put in a situation where he has to defend himself, he will do so with great skill. Unsurprisingly, Monkey is known for his agility and resourcefulnes as well as his great strength. He uses his climbing talents, along with his martial arts skills, to attack his robot enemies.

In Enslaved, Monkey is reluctantly partnered up with Trip. The relationship between Trip and Monkey continues to evolve in various forms of complexity as the game advances. They seem to both benefit from this relationship as Monkey becomes more dependent on Trip, while she gains in confidence and strategy. Monkey starts to break away from his loner tendencies and begins to learn how to cooperate with people and trust them. Though they constantly argue, they still seem to have a mutually beneficial relationship and ultimately help each other out when they need it.

As a result of their mutual partnership, Monkey and Trip develop romantic relationship while travelling thoughout the Wasteland.

Monkey was born sometime during the 150 year aftermath of a global war which reduced Earth into a ravaged wasteland. Monkey mentioned that he never knew the name he received from his parents, and at a young age, they were tragically murdered in a Mech attack. As a result of this event, he begrudgingly grew up in the rough wilderness alone where he learned to fend for himself, naturally acquiring the skills and tools necessary to survive in the brutal world and gradually developed into a gruff, cynical and vicious loner.

He later managed to salvage a motorcycle which acted as his primary source of transportation, he conducted trades with various tribes and settlements in order to acquire food and fuel, upon where he acquired the name ‘Monkey’ due to his acrobatic abilities. 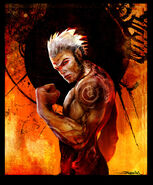 Add a photo to this gallery

Retrieved from "https://enslaved.fandom.com/wiki/Monkey?oldid=4718"
Community content is available under CC-BY-SA unless otherwise noted.