Enslaved Wiki
Register
Don't have an account?
Sign In
Advertisement
in: Characters, In love with a monkey , the feelings of Trip 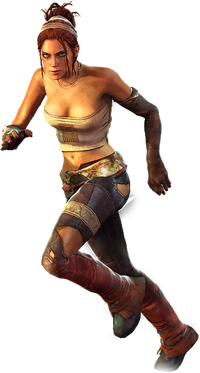 In contrast to Monkey who relies on his survival skills and power, Trip is a 19-year old who originated in more civilized areas. She comes from a wind farming community. In this community, the people are known for their expertise of reprogramming old technology. Trip is also extremely skilled at reprogramming. Regardless of her skills, she still can't survive alone and needs a bodyguard. By using Monkey's strength and combat skills, she has a chance to achieve freedom. Trip hacks into a slave headband and places it on Monkey's head, forcing him to escort her back home or suffer a painful death.

Trip can use her dragonfly camera to scan for deadly mechs and weaknesses so Monkey can take them down. She can open doors, solve puzzles, distract enemies, and more.

Trip admits wrong-doing several times during the journey but decides to leave Monkey's headband on. She is very aware of it trying to compensate for it by saying things like "if that's what you want". Eventually, after breaking the deal, she decides to remove it but is stopped by Monkey himself.

Trip develops strong feelings for Monkey which she indicates in various subtle ways (e.g. an awkward attempt to offer him a home in her village).

Community content is available under CC-BY-SA unless otherwise noted.
Advertisement